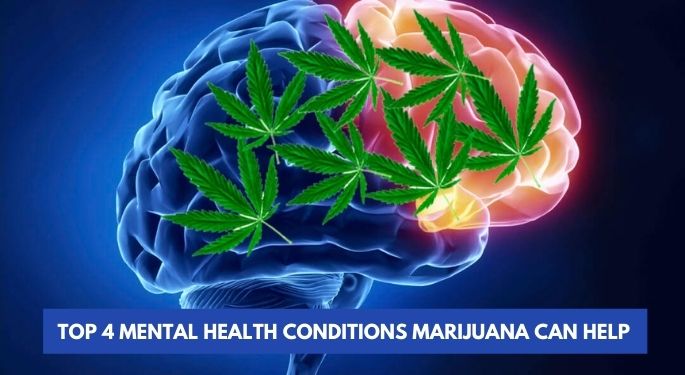 According to the University of California San Diego School of Medicine researchers, older adults use marijuana, primarily for treating common illnesses, such as anxiety, depression, pain, etc. Data indicates that 61 percent of the patients start using marijuana after the age of 60. The study of 568 participants was published in the Journal of the American Geriatrics Society.

Since medical marijuana use isn’t linked to any potential side-effects, more states are loosening the restrictions for patients. If you live in a cannabis legalized state, you can easily get marijuana from licensed dispensaries using your MMJ card Oceanside. Moreover, you can grow cannabis plants at home for personal use.

Anxiety is a common mental health disorder affecting the lives of millions of Americans. Common causes of this condition are traumatic events, work stress, relationship problems, etc. The COVID-19 pandemic has also left a large number of people with anxiety.

There’s scientific evidence that marijuana can improve cognitive performance, sleep, etc. to help individuals with psychiatric disorders, such as anxiety. The marijuana plant has more than 100 cannabinoids, which work the same way as endocannabinoids produced by the body. Thus, by interacting with the endocannabinoid system, cannabis compounds can help boost mood, memory, and other functions.

CBD can help improve the sensitivity of the hypothalamus to cortisol—the stress hormone. CBD is a non-psychoactive cannabinoid available in the form of concentrates, oils, lotions, etc.

Antidepressants, stimulants, and non-stimulant medications are often prescribed for managing ADHD symptoms. But, they can cause certain side-effects. For instance, stimulants can cause mood swings, loss of appetite, depression, etc. Marijuana cannabinoids, such as THC and CBD can help ease ADHD symptoms by stimulating the endocannabinoid system.

Research says that cannabis can stimulate the brain’s dopamine, just like medications. A study published in Nature journal reported that THC can help increase the levels of dopamine in the brain. However, cannabis treatment works for short-term, and long-term use may result in some health issues.

PTSD triggers due to a traumatic event. It could be a natural disaster, rape activity, violence, terrorist event, or sexual abuse. Patients with this condition often experience flashbacks of the traumatic event, which can cause disturbances in their lives. Cannabis compounds are packed with amazing medicinal properties, which can help ease PTSD symptoms effectively.

Studies have found that improper signaling of neurotransmitters, such as anandamide, can trigger a fight-or-flight response, a psychological reaction that releases cortisol and adrenaline. This results in affecting heart rate, digestion, and other functions.

According to a recent study, CBD can help boost blood flow in the hippocampus and other brain regions associated with memory processing.

Obsessive-Compulsive Disorder (OCD) is associated with the generation of obsessions and unreasonable thoughts, which can interfere with a patient’s ability to think and perform. Marijuana treatment for OCD works as medications, but the former doesn’t cause any side-effects.

Marijuana can help OCD patients promote sleep, relieve headaches, and promote relaxation. Clinical studies have confirmed that CBD is effective in managing anxiety and easing nausea. Buy any type of CBD products from The CBD Store.

Related- Everything You Need to Know About Cannabis For Sleep

Marijuana can be used as an effective, natural treatment for anxiety, depression, OCD, PTSD, and ADHD. Scientists have confirmed that the herb contains cannabinoids, which possess ultimate medicinal properties. When you consume phytocannabinoids, they stimulate the endocannabinoid system by binding to the receptors, as endocannabinoids.

The concentrations of cannabis cannabinoids, such as THC and CBD play a key role in the kind of medicinal effects you receive. So, when buying cannabis flowers, concentrates, or edibles, make sure you check the label carefully. We recommend you start slow and take your time to understand what’s working for your condition. Speak to your doctor for professional help regarding marijuana treatment.
Talk to a licensed doctor online for a new or MMJ card renewal Oceanside.

We provide medical cannabis recommendations, marijuana growers license, and cannabis card renewals to patients in Oceanside, California. Get these services from us today and help us provide you with the best health care facilities.

“I used this clinic for getting my medical card through a video call. At first I was skeptical but it is all completely legit! I discussed my issues with the doctor and he did a for me. It was so convenient and fast, I never left my house.”